"The Orphaned Wildlife Rehabilitation Society is a non-profit organization whose volunteers are dedicated to public education and the rehabilitation and release of injured and orphaned birds"  is located in Delta, B.C. 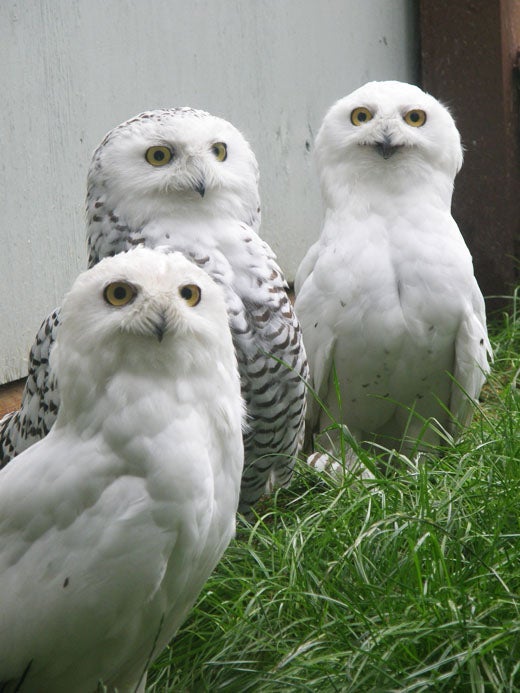 I never knew it was there until we went on a field trip with my daughter's grade 4 class.  They had been studying birds of prey and this was a good way for them  learn even more. Apparently O.W.L.  has existed since 1985.  I must admit, I had absolutely no idea it was there.  It was a fascinating experience.  The volunteers brought an owl into the classroom to show the kids and it was quite amazing to see these amazing birds so close up.

Then the kids got to walk past the pens and see various birds of prey from about 15 ft away.  The most amusing were the pair of Turkey Vultures (named Pepe & Precious) because, as the volunteer explained, they will projectile vomit a foul smelling substance when they feel threatened.  She warned us to be particularly quiet when walking past their enclosure.

Birds of prey are brought to O.W.L from all over B.C, other provinces and even the US.  The goal is to rehabilitate and then release them, but some birds have injuries that would prevent them from being able to live on their own in the wild.  These birds become residents of the sanctuary and often help out taking care of babies that are brought in or other newly injured birds.  They tend to live much longer than they would in the wild and the staff get to know them really well. The photo to the left is of Piggy, Kermit, & Serenity - three of the Snowy Owls who reside at O.W.L.

I highly recommend a visit to this sanctuary.  It really raises awareness about birds that we rarely get to see.  The class learned a lot of valuable information, and perhaps the best one I could repeat is this:  If you are eating an apple and want to toss the core out of your car window, or a ditch etc.  DON'T.  One of the most common ways a bird of prey will get injured is by diving to get a mouse or other rodent who is nibbling on the apple core. They are so fast that oncoming cars don't have a chance to stop and they get hit.

Demon & Daisy, Barred Owls who both live at O.W.L.